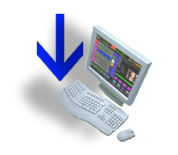 This Page Reviewed By Bose

These are the latest versions of the ToneMatch Updater application.

If you have questions please see ToneMatch Updater discussion.

Mac OSX users may see this message when trying to install a Bose app. If this message appears, try the following:

Mac users may need to hold the Control key (Ctrl) when opening the file.

In the menu that appears, select Open at the top of the list 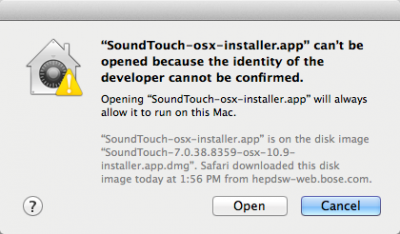 More information on Gatekeeper can be found at http://support.apple.com/kb/HT5290

application. You will not see any sign that anything is happening on the screen of the T1 ToneMatch Audio Engine.

After the update completes, you will not see the new firmware number on the screen of the T1 ToneMatch Audio Engine. You will need to turn off the Power on the Power Stand and then turn it back on for the update to be recognized. You may have to restart the L1® Updater software too.

Note: You should restart your computer after applying the firmware update before attempting any further updates to your T1.

Version 1.3 fixes a rare issue with the power stand firmware update process. On earlier versions the power stand could be affected by two failed 'L1 model II Firmware' updates in a row.

We recommend upgrading from 'L1 model II Firmware' version 1.0 or 1.1

It is highly recommended that you also download and apply T1 ToneMatch® Audio Engine Firmware Updates Version 1.8 if you don't already have 1.6.

This is not required if you install L1® Model II Power Stand Firmware Version 1.3 above

Download is no longer available because this version has been superseded by version 1.4

Fixes a bug where some power outages could cause the L1 model II to hang. This is related to the problems reported on the message board where some users have experienced a loss of audio sometimes accompanied by a blank blue T1 LCD screen.[2]

We've also made some changes to the fan behavior to make it less noticeable.